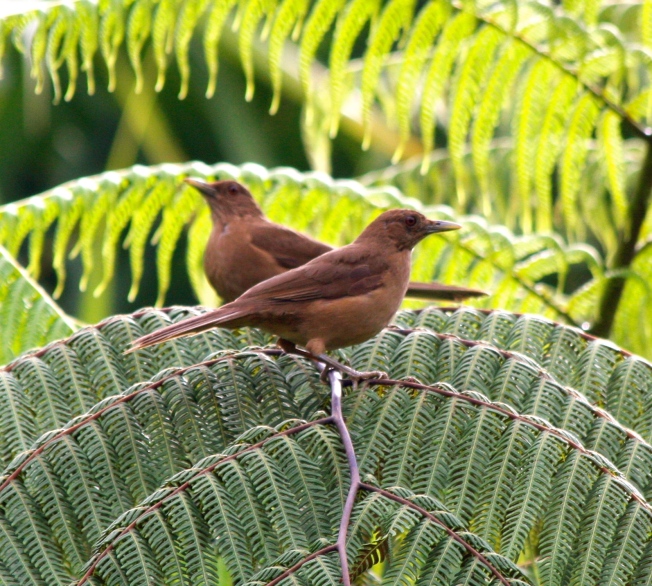 On a recent trip to Costa Rica, I was awakened each morning at dawn to an exquisite sound…the beautiful song of the Clay-colored Thrush.  Before I ever spotted one of these birds, I was mesmerized by its beautiful serenade.  And when I finally saw one of them, I was surprised by its bland appearance, and I was even more surprised when I learned that this plain-looking bird is the national bird of Costa Rica!  In a country full of flashy and iconic birds – such as the macaw, toucan and motmot – why in the world would a tawny-brown bird that blends into the scenery be chosen as their national bird? But then when I connected this ordinary bird with its ethereal song, it became extraordinary in my sight.

The Clay-colored Thrush has achieved national bird status not by being showy, strong, colorful, huge or any other superlative. This common bird gained its status by simply using its God-given talent of singing its beautiful song. It has a tendency to live close to humans and is widespread throughout the country of Costa Rica, so each day its residents are all awakened by the same lovely sound – a rich, enchanting call which unifies the entire nation – making it an excellent choice for a national bird!

This ordinary bird is a great example of how God uses ordinary people for extraordinary purposes. God knows what’s in our hearts, and He’s not concerned with outward appearances. Most people spend hours each week maintaining their outward appearance, but they spend very little time developing their inward character and seeking out God’s purpose for their lives. Samuel almost overlooked David as God’s choice to be king of Israel, because he was young with a ruddy complexion, and he did not have the outward regal appearance of a future king. Not everyone is destined to become a king, but God has designed each one of us with a unique and meaningful purpose in mind. Live your life the Clay-colored Thrush — use your God-given talents and “sing your life song” to make an impact in the lives of those around you. Don’t let any excuses (such as your age, physical abilities, or outward appearance) stop you from fulfilling the extraordinary purpose for which you were designed!

May your journey here be blessed by an assortment of encouraging words, inspiring quotes, refreshing thoughts, and hopeful messages of God's limitless love. It is my desire that all who visit here be rejuvenated by their connection in this refuge of peace for the soul and inspiration for the spirit. Your comments are most appreciated and welcome. Thank you for visiting!

~ encourage one another daily ~ Hebrews 3:13